This is where my Vectrex programming stuff goes...

I’ll add things as-and-when I ether update any older projects or decide to start something new.

I've  gave this page a bit of a tidy up, so the links should work again, and I've added a few new links to some interesting stuff.

Games currently in progress or still under development...


Ok, don't know if anyone still remembers anything about this site but...

I haven't done anything with the Vectrex for years but I am looking at possibly doing some new things. Maybe finishing off some of the dropped games listed below, or perhaps something completely different.

Secondly I'm looking at modifying 'Vec Wars' to make a two joystick controlled version, and I now have a second controller to test it with.
I started looking at making 'Vec Wars 2,' but first I want to see how two joysticks will affect the game-play. I'll probably post this up on forums when I make a two stick version of the current game.

And lastly Vectrex technologies have changed somewhat in the last couple of years, so I started looking at making the full game that the engine behind the 'Trapped' concept piece game was made for.
** Unfortunately a combination of a PC crash and on-line stored data loss meant I've lost pretty-much all of the initial development for this. So right now I don't really feel like starting again.


No promises for any of this, I've got enough pressure and deadlines in my day job! :)

(As in I've stopped working on them)

Circus Vectrex  v2.0
This is (I think) the most complete version of the Circus Vextrex game.
It is the closest code to end product. And was the first game I intended to make a cartridge release for. Unfortunately all planes to release this were scuppered by various things, mostly revolving around the price to produce a set number of cartridges when I had no idea if any would sell.
This is loosely based on the Atari game, but was never meant to be a clone. The bounce physics are improved in the latest release, but are still based more on bouncing ball physics than jump physics. Honestly, just because I liked it better like that, and it's my game ;)

Gameplay:
The top of the screen consists of three rows of ten targets.
These targets continually move across the screen in the opposing direction of the line above.
The object of the game is to clear as much targets as possible, gaining points for each one hit.
The game speed starts off relatively slow, but increases a little with each target hit.
When a full row is cleared it is replenished, bringing back all the target objects for that row.
The fewer objects there are on the screen the faster the games speed increases.
So replenishing a row slows the game speed down again making it easier to aim and hit the objects.
The targets are removed by catapulting an Acrobat at them using the see-saw at the bottom of the screen.
The Acrobat movement works in a manner similar to a break-out style game, causing the Acrobat to tumble through the targets, clearing them from the screen.
However, the Acrobat may also lose momentum, if it in in the air too long and hits too much targets, causing it to fall.
In order to keep the Acrobat in play you must ensure it lands on the free side of the see-saw, launching the other Acrobat into the air.
The see-saw can be flipped by pressing any button on the controller.
A missed landing will result in the loss of a life.
When all lives are lost the game ends. 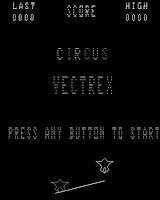 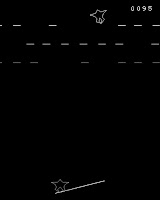 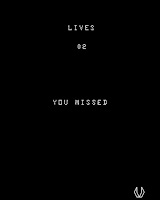 Download the latest BIN file here.
See a later version of the game being played.

Play CircusVectrex in your Browser. 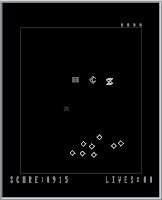 This is a very striped down version of a 'Geometry Wars' type concept, with semi-intelligent enemy movement and basic levelling up of enemy types where different types of enemy are gradually introduced during the game until all types are constantly present on screen.Five distinct types of enemy are used in total, each with their own behavioural pattern.
A laser is used to shoot, with a power bar limiting the amount of shooting you can do at any one time. When hit you are re-spawned to a random place on the screen, and all enemy movement is frozen for a limited amount of time in order for you to get out of any trouble you may be in.

You can download the latest binary heer.
I'm looking at making a two joystick version of this, just to test the game play.
Video: Vec Wars, later revision gameplay.

Spike and the Angry Vortex Bird
This was  my first  semi-serious attempt at making a Vectrex game. 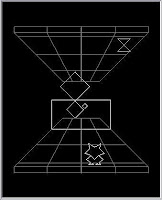 This is basically a dodge-em and collect-em-up. The player has to avoid, or destroy,  the flying diamond 'missiles' and the rectangular horizontal and vertical 'walls' that come towards you up the continually moving pseudo 3D corridor, whilst collecting the two-triangular 'timer' objects.
The attack-wave configuration changes four times before the end level 'boss' screen appears, where you have to kick enough of the small 'bird' objects to pass the level, whilst avoiding yet more diamond shaped 'missiles' being fired from the boss in the middle of the screen. 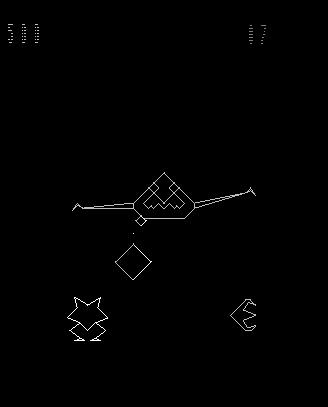 Spike can only avoid being hit by the moving ‘walls’ but can kick out to the left or right to hit the diamond-shaped ‘missiles.'

Enough timers must be collected in each wave in order to move to the next, but the more diamonds destroyed the mote points you get.

Kicking can be useful for getting Spike out of tight situations, although this is more dangerous that simply avoiding all enemy objects.

In the end 'boss' screen you must kick enough of the smaller bird enemies, which randomly scroll along the top and bottom of the screen, hitting enough of these will restart the main game waves.

You can download the latest  binary file heer.
Video: You can see the gameplay heer.

This game is my first attempt at a survival horror type puzzle game on the Vectrex.
It is written using a new room-based maze generating engine that I was working on, and may still have a few underlying bugs. It is however, a full game which is fully playable and does have an end. 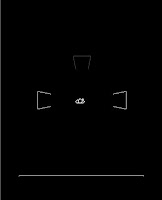 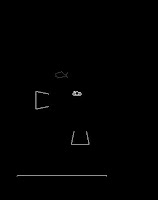 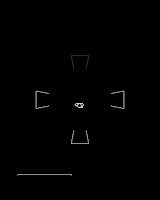 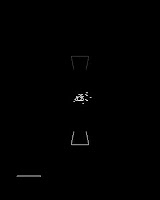 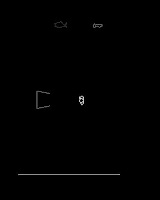 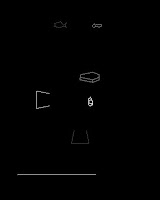 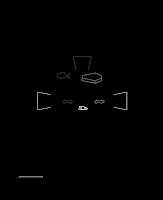 There is no scoring in Trapped, as it's more of a free-roaming puzzle and exploration game.
Although there is a timer and an adversary there is no shooting, so you must figure out how to escape from harm in other ways.
It's an attempt at a slightly slower paced, more thoughtful, game on the Vectrex.

You can see a video of this game being completed Here. 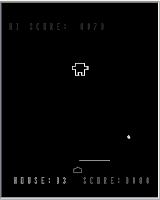 This was a very early learning program, that I wrote a while ago, when first testing out assembly on the Vectrex.
It basically grew out of the ubiquitous 'Pong' type demo program that I usually write as a first game on every new platform I write for.

So, it started off as pong, with some basic drawing and movement routines, before adding the very simple ‘Monster' and 'House’ graphics. This was the first thing I had written where the user interaction had any sort of point or purpose. I wouldn't call this a 'game' exactly, it's just me learning to move things and check for collisions on the Vectrex.

In this example program a ‘monster’ (the block man thing) slowly comes down the screen towards your ‘house,’ which is randomly generated along the bottom.
You have to try and hit the monster with the continually bouncing ball by moving a bat – breakout style ish...
Don’t expect too much in the way of game-play from this though, as I said it was mainly done to get me acquainted with the basic drawing and movement ROM routines used by the Vectrex.

I've put the assembly up here in case anyone wants to look at it for learning purposes.
The code is quite simple (not to mention short) and should be relatively easy to follow.
You can view the Monster House source (ASM) file heer.

N.B. The Monster House code is really only of use for example purposes, and shouldn't be taken as a 'game' although I have seen compiled versions of this out-there on various sites.

Spike and the magic lamps - This game is not currently in development. 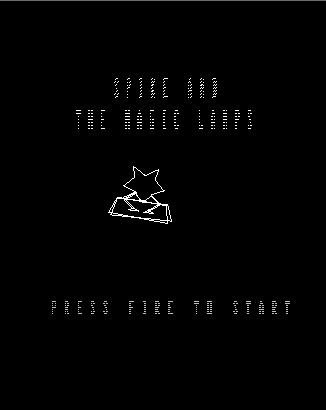 Right now this is little more that an attract-screen, a basic idea and some half written movement routines. It was the first game I started that’s based on a modular design, so I may resurrect it and add some more modules to it at some point.
Sorry no working demo is available to download...


Maxwels Daemons  - This game is not currently in development.
Currently dropped, but I may resume this using vectors instead of the 'text' for the balls. Trying to move text objects fast seems to slow processing down a lot more than simple drawing objects do. 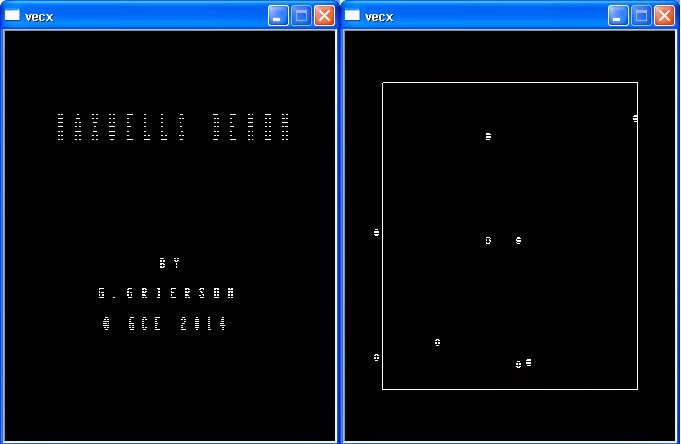 This was an experiment with using plotted text objects and arrays to make a (bouncing ball) game based on the Maxwell's Daemon thought experiment.
The idea was blatantly nicked from an old Atari 8Bit game of the same name.
I may still do some work on this in the future.
Sorry no working demo is available to download...


Floppy Fish - This game is not currently in development.
I dropped development of this game some time ago, it just wasn't turning into something enjoyable or playable.  All that currently exists  in a 'playable' (sort of) state is the very rough (three night) de-make of the Flappy Bird concept.
This was originally just done as a bit of fun, to be intentionally bad, and shouldn't be considered a playable finished game.

Unfortunately the original version of this ROM has somehow escaped into the wild!
I even saw it played from a multi-cart on YouTube once, which I popped in and apologised for.
If you see this ROM please pretend it doesn't exist, thank you  😉


Here are some screen shots of my original, three evening effort, so you know to avoid it ;) 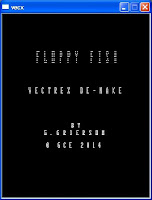 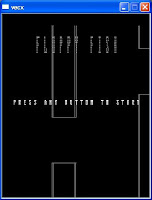 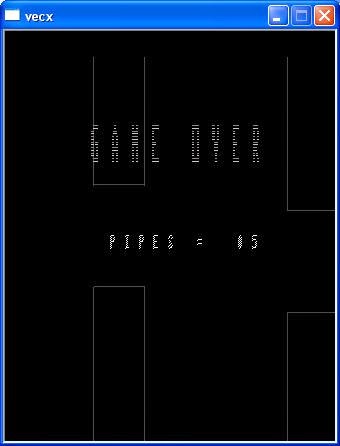 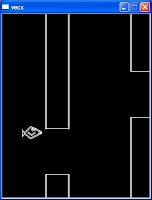